Spain, Poland and Sweden lie in wait should Ireland qualify for Euro 2020

Is home ownership in Finland slipping out of reach?

The largest glacier in continental Europe is retreating fast. Catch this wonder of nature while you still can.

In many ways, Jostedalsbreen is the very heart of Norway. The ice cap at the centre of the Norwegian mountains is the largest glacier in continental Europe.

While you may have the impression that glaciers are remote and difficult places to reach, that’s not the case here. More than twenty arms reach out from the main ice pack into valleys below.

The glacier is sandwiched in between the inner reaches of two of Norway’s biggest fjords, the Sognefjord and the Nordfjord.

The total area of Norway’s glaciers has reduced by around 12% over the last fifty years. Time is running out to see the best of Norway’s epic glaciers, as all signs are pointing towards an acceleration of the decrease.

At first glance it’s difficult to appreciate the vastness of the glacier as you’ll likely only see a small arm. So, here’s a little perspective: 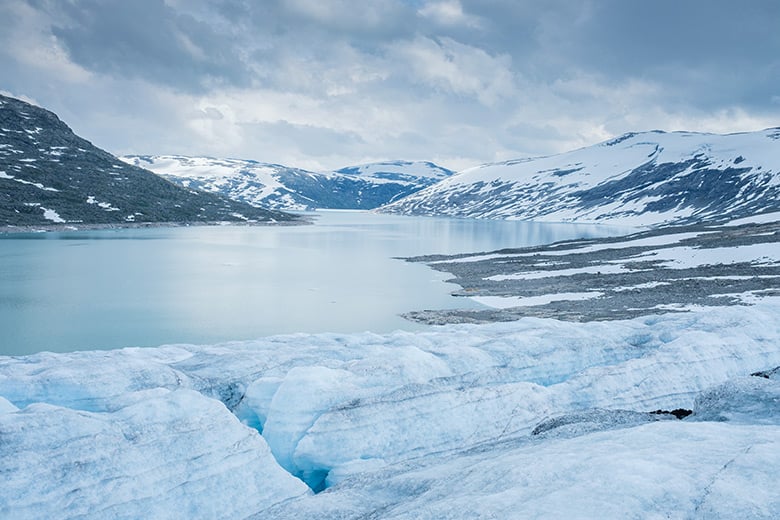 How Jostedalsbreen was formed

Glaciers were responsible for the world-famous Norwegian fjord landscape. The ice caps were created throughout a period of extreme cold that ran from approximately 4100 BC to 500 BC.

Norway’s glaciers, including Jostedalsbreen, advanced during the late Middle Ages during a period with lower than average temperatures. Historical evidence shows that during that time Nigardsbreen was at its biggest.

The glacier is changing fast

Mainland northern Europe’s largest ice cap had for years continued to grow rather than retreat, but in recent years this has started to change. Considering how little Jostedalsbreen has tended to grow over the past decades, the changes in the last 25 years are astonishing.

The Glacier Museum at Fjærland monitors movement in the ice cap, and recently compared photos from 1997 to today. “We can see that the regenerated glacier below the icefall is almost melted away. Exposed bedrock under and around the glacier tongue gets increasingly visible. The changes since the late 90s are big. From 2003 to 2014, when we started the measurement program, the glacier has retreated 160 metres.” 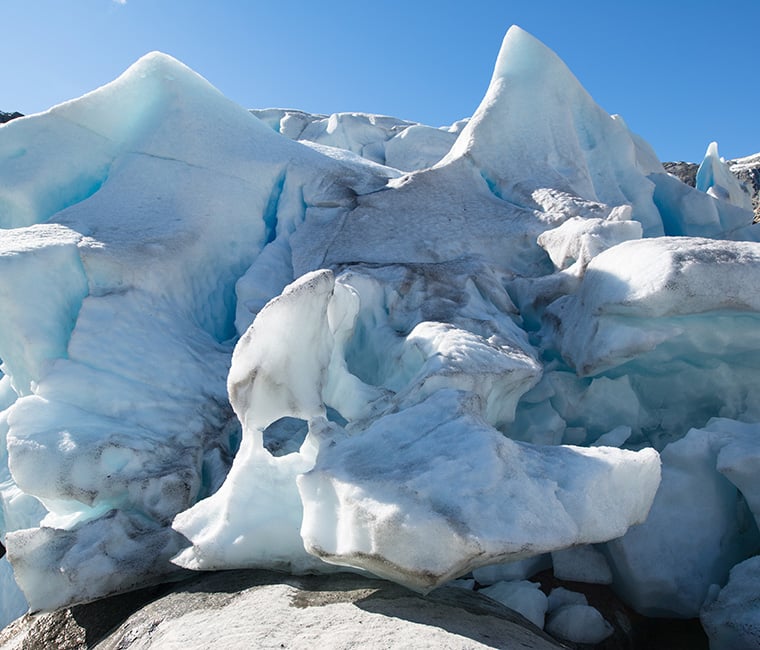 One of Norway’s largest national parks, Jostedalsbreen National Park was established in 1991. It covers an area of more than 1,300 square kilometres, much wider than the glacier itself.

The scenery in the national park may surprise you. There’s ice, yes, and plenty of it! But there’s also lush green valleys with rivers and waterfalls. Information centres are operated at Oppstryn, Fjærland and Jostedal.

Let’s take a look at some of the more famous and easily accessible arms of the glacier.

The most easily accessible of all Norway’s glaciers is also one of the most famous. That’s largely thanks to Norwegian landscape artist Johan Christian Dahl, who featured the ice giant in several paintings. 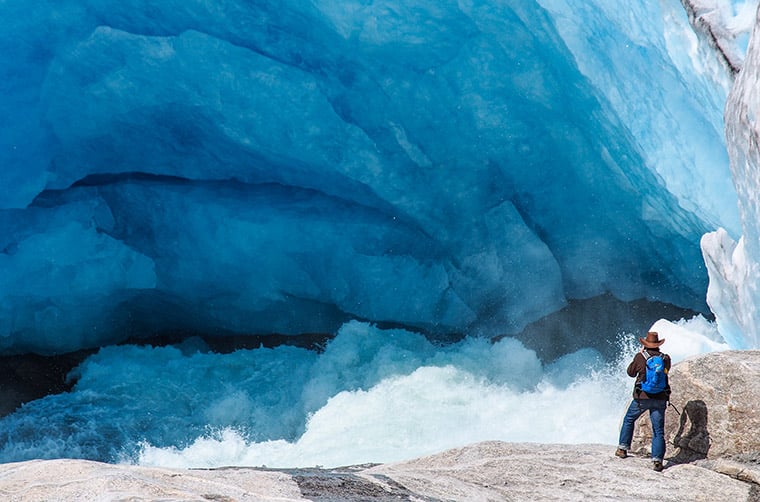 Because of its fame and accessibility, Nigardsbreen is one of the best places to explore the ice itself. Several tour guides compete on the route, some aimed at experienced hikers and others aimed at families. On some tours, children as young as eight-years-old can join.

The glacier arm is located around 30km north of Gaupne, west of the Jostedøla river. The best starting point is Jostedal village, about 10km of the glacier. Here you’ll find Breheimsenteret, one of the national park’s visitor centres. Not only can you learn more about the glacier, most of the tours start from here too.

From Breheimsenteret, take the 3km toll road by local bus or your own car to the parking area. From here you’ll have to walk around the lake to get up close to Nigardsbreen. During the summer a boat is on hand to take tourists across the lake, for a fee of course.

The popular Briksdalsbreen glacier arm plunges down from a height of 1,200 metres into the valley below. The picturesque Briksdal valley is known for its waterfalls and popular hikes.

The most popular is the 3km walk from the car park at the lodge to the glacier. Alternatively, hitch a ride in one of eleven ‘troll cars’ that run during high season. There’s a cost for the ride, but it’s a unique way to take in the surroundings. 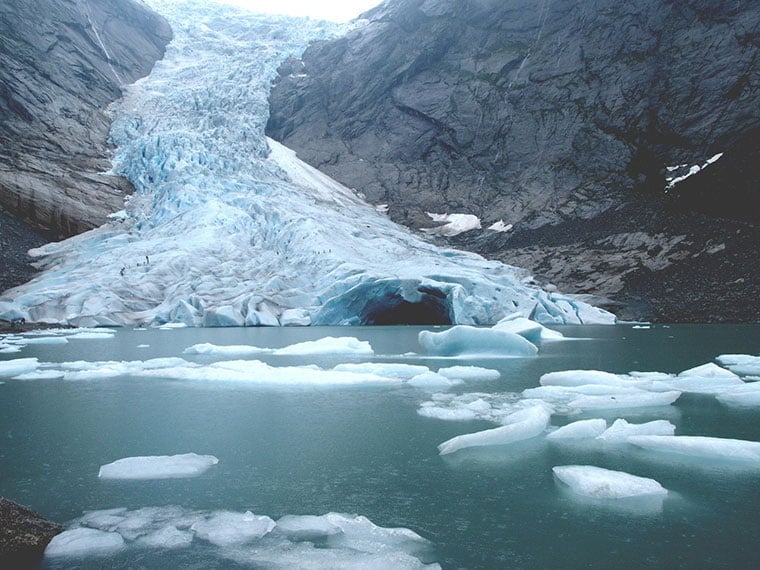 Because of the rapid retreating of the ice in recent years, there’s a risk that Briksdalsbreen may break away from Jostedalsbreen. At the time of writing, ice hiking tours have been moved to the Tystigbreen glacier.

The 11km-long Tunsbergdalsbreen is the longest of all Nigardsbreen’s arms. It was the site of the 1959 expedition by British universities and a non-profit organisation. 184 participants took part in the expeditions to study the glacier movements.

The beautiful fjordside village Fjærland is best known for its idyllic location at the foot of Jostedalsbreen. But there’s more to this village than just the looks! A couple of second-hand bookshops have given old buildings a new lease of life in this village of just a few hundred people.

The village did without roads until 1986 when a new tunnel linked Fjærland with Skei. In 1994 the road to Sogndal opened. Up until that point, the only way to reach the village was by ferry.

There are trails galore immediately outside Fjærland. There’s hiking here for all skill levels. Hikes range from a family fjordside ramble to more challenging mountainous hikes up to the glacier arms.

The most popular? That’s the trail leading to the cabin Flarbrehytta at 1,000 metres above sea level. From here, you’ll see the Flatbreen glacier arm in one direction, and the fjord and Fjærland in the other.

Ski touring season lasts from November to May, occasionally even longer. Local guides take visitors skiing down the steep glaciers or the mountains.

For a more extreme challenge, the Josten på langs skiing tour explores the entire length of Jostedalsbreen. The three-day tour from north to south is considered one of Norway’s most challenging—and rewarding—ski tours.

Life near the glacier

There are villages dotted all around the valleys and fjords that surround Jostedalsbreen. How do these people make a living? Perhaps given everything I’ve talked about here, you won’t be surprised to hear that tourism is a major driver of the economy here.

Locals run campsites and hotels, lead guided tours, and provide all manner of expertise to visitors. But tourism isn’t the be all and end all of life near the glacier.

Agriculture remains an important driver of the economy. The land along the glacial river deltas is actually good for agriculture, although it requires decades of preparation. Snow covers the meadows for up to half of the year.

Hydropower is one of Norway’s biggest industries. The glacial meltwater provides a constant flow of water throughout the summer. Several hydroelectric power plants convert this flow into electricity.

Getting to the national park

There’s not much public transport infrastructure in this part of Norway. So unfortunately, using your own car or renting one is by far and away the best way to explore the park and glacier. That said, public transport does run from some of the nearby towns.

During the summer season, there is a daily glacier bus from Sogndal to and from Breheimsenteret glacier centre at Nigardsbreen. Getting to Sogndal is possible by plane from Oslo, or by bus or express ferry from Bergen.

Because of the number of glacier arms and possible starting points (Sogndal, Fjærland, Olden etc), it’s easy to incorporate Jostedalsbreen into a fjord Norway road trip.

In the social media age, it can be tempting to venture on to the glacier for a selfie or video. However, glaciers are moving blocks of ice and extremely dangerous environments. Importantly, setting foot on a glacier in Norway is only permitted with an authorised guide.

Something that trips up many international visitors is not having the appropriate equipment. If you’re planning on a hike, you’ll need warm clothes and good shoes, but also sun protection lotion and sun glasses! Yes, really! When the sun shines, the glare from the ice can be extreme. It’s also a good idea to take plenty of water and snacks, just in case.

You can now get a negative-rate mortgage in Denmark

Take extra care if you're out and about on Sweden's roads this week. A weather warning for icy conditions...

Tesla Is Cold in Norway — And That’s Important